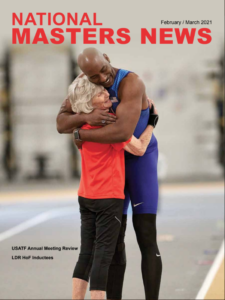 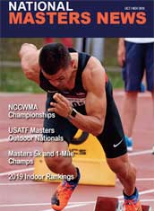 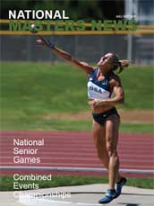 Today’s seniors are not the golden agers of old; they are active, they are competitive. National Masters News provides them the opportunity to see what their peers are doing, to see how they measure up, and to discover how much fun Masters sports can be.

Providing training and nutritional advice, meet results and highlights, annual rankings lists and sport current events, National Masters News provides a forum for all involved in MTF to share their stories and photos, find information about the sport and discover what a tremendous thing it is to still be able to do that which they love, at any age. 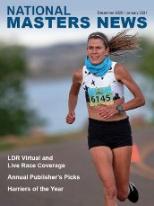 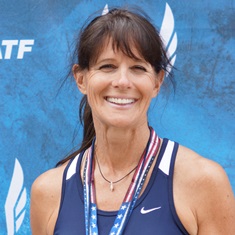 Publisher since 2014 Amanda Scotti hails from the track-lovin’ state of Oregon. After attending Clackamas Junior College (1978 NJCAA Women’s US Track Champions) on track and journalism scholarships she transferred to Alabama’s Auburn University to complete her education. She has earned several Masters and Seniors US sprint championship titles since discovering Masters Track in 2008 and is currently a member of the USATF MTF Executive Committee, having been elected in 2016. Scotti, who moved to California in 1988, lives in Folsom with her two sons, Jack and Sam.

TF Highlights writer Karl Ross is a Miami-based writer and runner. Holding a journalism degree from the Univ. of Missouri he has worked for online and print publications in New York, Puerto Rico, South Florida and elsewhere. Karl became serious about running at age 40 — thanks to his wife, Rachelle, who signed him up for local 5ks against his will. After years of road racing, he discovered Masters Track and Field and has competed at numerous USATF championships. He owns way too many running shoes and spikes and  also works as a forensic accountant.   .

Long Distance Running head writer, Paul Carlin is a ‘running prof’ in two senses. He is a Professor (Emeritus) of Economics at IUPUI, the urban research and health sciences campus of Indiana University, and he is a current (semi) professional road racer having won a number of national and regional road races.

Carlin authors a popular blog, runningprof.com, which provides useful information for both Masters and runners of any age. 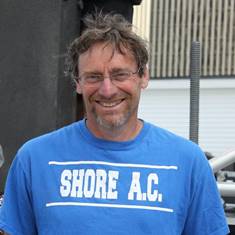 Masters Racewalk head writer Dave Talcott is an extremely accomplished Race Walker and the USATF MTF RW Records Chair. Talcott has qualified for four Olympic Trials and, at age 59, became one of the oldest athletes to ever compete in the Olympic Trials in any event, proving that age is just a number. In between writing for National Masters News, racing all over the world and keeping numerous stats for the MTF RW community, Dave and his wife, Erin Taylor-Talcott, train together in their hometown, of Owego, New York. and host the ‘Not Just a Walk in the Park’ and ‘Kennedy March’ races which are open to anyone wanting to give endurance events a try.

Staff writer Jack Scotti is a seasoned stand-up comedian and screenwriter, who infuses his own signature brand of humor into everything he does, including writing a humor column for readers of NMN. Some of his other favorite  comedic topics to write on include historical events, Bigfoot, and his own comedic escapades. Jack coached middle school track in Folsom California after being a stand-out longer jumper for his HS team and earned his degree in Film and Media studies from UC Santa Barbara before moving to Los Angeles to pursue a career in the entertainment industry. 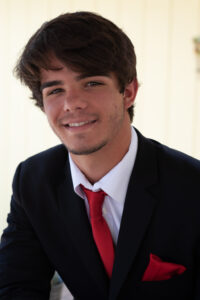 NMN Advertising Director Sam Scotti is currently a Junior at Sacramento State University, studying Marketing and Nutrition. Youngest son of publisher Amanda Scotti, Sam is helping to keep the job of producing National Masters News in the family. Sam’s experience in sports includes being a nationally ranked prep rower, who over his five years in the sport, twice helped his doubles and eight-man teams to national crew finals, and coaching weight training at both the high school and Club Crew levels.  Contact Sam to see how you can earn money referring advertisers to NMN: samscotti.nmn@gmail.com 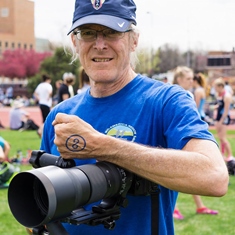 Colorado native Photographer Dave Albo attended the University of Colorado, Boulder where he still lives and works as a software engineer. A long time masters track and field athlete, his career highlights include 800m silver and bronze national championship medals, and 400m All American status. Albo is an avid sports photographer with a track and field emphasis whose artwork-like photographs celebrate the best of Masters Track and Field. A member of the Ric Rojas Running group, he trains alongside both masters and young athletes and enjoys photographing the group workouts. Albo claims his wife Patty Murray-Albo is by far the better athlete in the family. 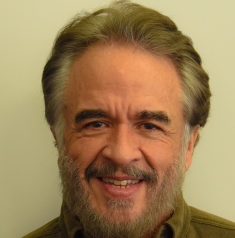 Rob Jerome is an award-winning photojournalist whose work has appeared in newspapers, magazines, scientific journals, web sites, television programs, museum catalogues and books. He has been photographing Masters Athletes since 2007. Prior to his career as a photojournalist, Rob was a partner in the management consulting division of an international professional services firm.